the lesson by Jane Jacobs

So in this book we shall start, if only in asmall way, adventuring in the real world, ourselves.

Perhaps this short and simple phrase from the introduction of the book The Death and Life of Great American Cities, contains the deepest meaning of the thought of Jane Jacobs, who lives today in some way in the global movement Jane's Walk.


The book was republished in italian by Einaudi in 2009 – with the title Life and death of great cities - subtitled Essay on American cities - enriched by a preface by Carlo Olmo, the director of Il Giornale dell'Architettura.


I was very impressed to see an abstract painting (I really like it anyway!) - Suprematism (with eight red rectangles) of Kazimir Malevich - as the cover of a book that precisely fights against the application of abstract ideas to reality. Is it a sort of provocation?
I just read this amazing book, that I discovered only recently, certainly not during university studies and much less in my professional experiences.


We must point out immediately that the real world of  Jane Jacobs is not the one that most of the people live, but the world of a very curious journalist, extremely well informed and able to translate into living and concrete thought the observation of reality.
I do not think she has much success among architects and urban planners, but not only because they are its main target, especially those who adhere to the thought arising from The Athens Charter and functionalism – as everybody can easily understand reading the introduction of the book. 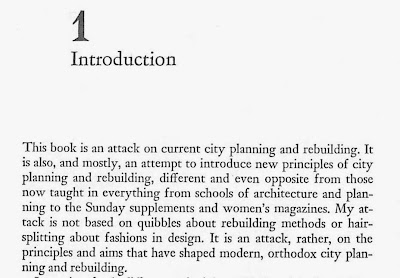 It happened to me not long ago to meet an architect who works with urban planning in Rome (he is very well placed in the right circuits, as they say). I realized, if there were any need, that urban planning is made by technicians whose great ability is to disentangle between a lot of rules and numbers - indexes, standard ... - but they don’t seem to have as its objective the quality of urban space. Unless someone does not think that having x square meters of green space and parking allows to obtain it… (Especially if, as happens in Rome in residential zones built recently, the large areas for parking lots are half-empty and residents' cars are parked just under the house, at the edge of the street).
Jane Jacobs, with his neighborhood activism and despite all the cultural, social, geographical and urban differences that separate us, described very well and in advance many of the problems we see today in our cities, especially in less central areas.


The most important thing is that she didn’t do it lunging at the idea of the city in the name of a return to the simple life immersed in the green of the countryside or of a village, but in the name and for the sake of the city itself and the need to save it. She explains it very well:

In the first part dedicated to the analysis of the city, applying an inductive approach, from the particular to the universal, she focuses on the key elements of the city life. Rightly she begins with sidewalks which considers the base unit, the most typical place, the one of social exchange and meeting of the people. In fact analyzing a sidewalk you may already understand many things about the life of a neighborhood; the safety of sidewalks determines security and social and economic health of a district, as well as its ability to connect to the rest of the city.
What can we say then of all those areas of the city where sidewalks are disconnected from the street and from public life and relegated to the service of one block or a building complex?


The analysis continues with neighborhood parks, that instead of being considered an absolute good should be realistically analyzed to see if they are appreciated and frequented or if they become abandoned, degraded and insecure places. Needless to say, in the second case it will be necessary to understand the reasons, often related to their wrong location or the lack of adequate functions, to try to make them more popular and vital.

Then she moves to urban neighborhoods, which in her opinion are of three types: the city as a whole, the neighborhood street and the large district with more than one hundred thousand inhabitants.
Here as well the author debunks one of the myths the most typical and misused by planners:

The second part of the book, entitled The conditions for city diversity, is undoubtedly the most interesting, because Jane Jacobs conducts his personal analysis of urban complexity coming to identify four conditions that defines the generators of diversity: the mixture of the primary functions - small blocks - aged buildings - concentration.


To generate exuberant diversity in a city’s streets and districts, four conditions are indispensabile:
1. The district, and indie as many of its internal parts as possible, must serve more than one primary function; preferably more than two. These must insure the presence of people who go outdoors on different schedules and are in the place for different purposes, but who are able to use many facilities in common.

2. Most blocks must be short; that is, streets and opportunities to turn corners must be frequent.


3. The district must mingle buildings that vary in age and condition, including a good proportion of old ones so that they vary in the economic yeld they must produce. This mingling must be fairly close-grained.

Despite the accurate analysis of the author supported by the observation and by the research, we can not be sure that a neighborhood more or less endowed with these four conditions become city, but there is no doubt that these are very important elements to consider if we want to launch a new season of urban planning.
No coincidence that in the US - where there are not our old towns, don't forget it! - Jane Jacobs has been considered since long time one of the most important protagonists of contemporary urban thought and, as Olmo writes in the preface, the New Urbanists have written their manifesto recovering many arguments put forward in this book.
I think it would be quite wrong however to interpret it as a manifesto against modernity represented by cars and by expressways or even worse in favor of the project participated as an expression of the special and exclusive interests  of a neighborhood in fight against the development of the city and its economy.
I prefer rather consider it as an important cultural contribution to the analysis of the city, analysis that actually becomes almost a mindset and a desing scheme that can help to build the city of tomorrow, and why not even the city of today.